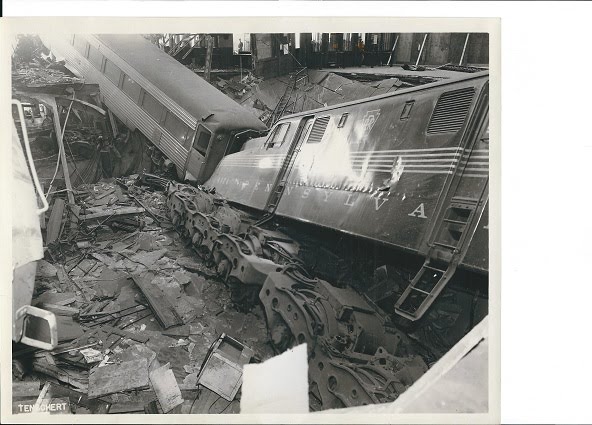 In 1953 we witnessed what was perhaps the most spectacular modern runaway passenger train wreck: The wreck of the Federal Express, January 15, 1953, at Washington, D.C.’s Union Station. The exact time of the occurrence–8:38AM–was forever etched in history by the clock in the Station Master’s office, which was located at the end of Track 16 and demolished by the 1500+ ton juggernaut when it passed through at a speed estimated to be between 35-50 MPH.

Many Miracles occurred that day:

1) No one was killed on board the train.

2) Somehow the train never derailed as it passed through the maze of switches at the mouth of the station.

3) No one was killed or even seriously injured in the station due in large part to one person’s 30-second warning for people to scatter.

4) The telephone in the Station Master’s office was uncharacteristicly picked-up on the lst or 2nd ring, probably due to the larger than normal passenger traffic volume created by the impending Presidential inauguration, only five days away.

But what REALLY happened to cause the brake failure? Why had something like this not happened before? Why did it not happen again?

The most authoritative accounts (and most widely available) of the incident were expertly detailed in the August 1953 issue of “TRAINS TRAVEL Magazine” (now known as “TRAINS Magazine”), and the April 1953 issue of “The Locomotive Engineer’s Journal,” which was published by the Brotherhood of Locomotive Engineers. These two accounts provide interested readers with the easiest access to information about this pre-inaugural event. Of course, the three Washington Daily Newspapers of the day: The Washington Post, The Times Herald, and The Evening Star all give vivid details and photographs of the day’s events and other newspapers throughout the nation gave wide coverage of the accident. Finally, highly detailed information on the events surrounding the accident is provided in the Interstate Commerce Commission’s accident report, which is quoted here, in part.

The single cause of the accident was the improper placement of the angle cock on certain New Haven Railroad coaches that caused it to strike a buffer pocket and resulted in the angle cock turning and closing off the application of air to all those cars behind where the angle cock had been turned. The use of angle cocks permits the airbrakes to be automatically controlled from the locomotive. The exact wording of the Interstate Commerce Commission findings and recommendations are as follows:

1. The angle cocks on New Haven car 8665 and other cars of similar construction are so located that the handles of the angle cocks are permitted to come in contact with the bottom cross member of the buffer pocket portion of the underframe end construction.

2. Between the time the brakes of (Train #) 173 were released after the train stopped in Baltimore and the time the engineer attempted to apply the brakes as the train approached Washington, DC, the angle cock at the rear of car 8665, the third car of #173, became closed, obviously as a result of contact between the handle and the bottom cross member, and after this occurred the brakes of the rear 13 cars of the train could not be applied from the locomotive.

3. The engineer was not aware of the condition of the airbrake system until he attempted to reduce the speed by use of the air brakes.

4. Because the air brakes of the rear 13 cars could not be applied from the locomotive after the angle cock had become closed, the engineer was not able to stop the train short of the end of station track #16.

5. The two train-service employees who were in the cars behind the third car did not become aware of the necessity of making an emergency brake application until it was too late for them to take action.

“We recommend that all passenger train cars equipped with tightlock or similar type couplers operated over any railroad subject to the Interstate Commerce Act be inspected immediately, and that such cars on which any angle cock is so located that the handle can come into contact with any other portion or appurtenance of the car be withheld from service until such condition is corrected.”

Some interesting parts of this story that have been largely forgotten:

1) The problem had in fact cropped-up earlier on the trip down from Boston and the train was delayed for 57-1/2 minutes in Kingston Swamp, RI, isolating the condition and resetting the offending angle cock on the rear of the third car.

3) At Penn Station New York, a complete change of train crews, engines, and engine crews took place. The Pennsylvania RR took over from this point onward. Once again, no word passed on about the problem out in Kingston Swamp, nor was there any reason to suspect that anything was amiss.

6) GG-1 #4876 currently resides in Baltimore, MD, as part of the B&O Railroad Museum’s collection. It is not on public display and awaits restoration.

7) Moments after the wreck, a surprised and uninjured engineer and fireman calmly stepped out from the front end of cab onto all the debris that had fallen about them. They, like everyone else, were still puzzled as to why the brakes had failed to operate properly. Engineer Brower then suddenly remembered he had left his four timetables in the wrecked motor and asked his fireman to retrieve them for him while he (Brower) looked to render aid where needed.

8) Engine #4876 started its service life painted Brunswick Green. After the Federal Express wreck, it returned to service in October, 1953, painted Tuscan Red and remained in this color scheme until Penn Central/Amtrak when it received the customary Black, which is the color (if you want to call it that) it retains to this day. Retirement came in 1981 after over 40 years of active service.

9) As the engines were changed in New Haven, CT, three additional sleepers were added to the train making it 16 cars in length.

10) At Baltimore, MD, the last stop before Washington, DC, several dozen commuters embarked for the short journey to Washington, unaware, of course, of the historic event that would unfold in less than 45 minutes.

11) Amazingly, there was very little disruption to the normal flow of rail travel, other than the obvious closing of Track 16 and adjacent tracks for rendering assistance and cleanup. Within two days, the entire area was covered over and all returned to normal, except to the trained eye. The passenger cars had all been removed but it would be nearly another two weeks before the GG-1 would be cut up into smaller pieces and removed from the basement baggage room for reassembly in Altoona, PA.

12) Try as they might, no “Communist Conspiracy” was ever seriously advanced. The cause of the accident was plainly and clearly the angle cock striking the buffer pocket.

13) After the engineer applied the brakes, with very little response, the train essentially skidded for up to 2 miles, with a trail of sparks all the way. when the cars and brakes were examined after the wreck, the engine and first 3 cars’ brakes were scorched and flat, but the rear 13 cars, brakes showed no signs of wear. It has been said that the 237-ton GG-1 locomotive had flat spots on its wheels over 5 inches long!

14) This writer has been told by a person in the area at the time who worked for Washington Terminal RR Co. that after the stop, a lady commuter disembarked from the rear of the train, totally unaware of the events which had just unfolded with the comment “That’s the roughest stop I have EVER had!” It is also recorded that a passenger broke-out one of the windows in his car stating, “I’ve always wanted to do that.”

15) When the brakes were first applied, the train was at legal speed of 80 MPH or so. In the two miles of mostly sliding down a slight downgrade into the station, the train had slowed, by most estimates, to a speed of 35-50 MPH.

Wreck of the Federal Express