Skip to content
Washington, D.C.'s Union Station was built jointly by the Pennsylvania (PRR) and Baltimore & Ohio (B&O) Railroads on an area of swampland near the U.S. Capitol Building. The station, designed by architect Daniel Burnham, opened with the arrival of a B&O Railroad passenger train from Pittsburgh on October 27, 1907. A magnificent gateway to our nation's capital, the station has served the needs of the traveling public continuously since that year. Besides the B&O and PRR, the station also served the Chesapeake & Ohio, Southern, Richmond, Fredericksburg, and Potomac (RF&P), Atlantic Coast Line, and Seaboard Railroads. During World War II as many as 200,000 passengers a day passed through the station. During the 1980's the station underwent a major renovation, costing over $160 Million Dollars. Completed in 1988, the effort restored the station's grandeur and remade it into a transportation, shopping, and dining megaplex. When built, the station concourse one of the largest rooms in the United States and regularly used for Inaugural Balls.  Today, the station is still traditionally host to one of these prestigious Presidential events every four years on January 20.
1901 – McMillion Commission
1903 – Construction Begins
1907 – First Trains
1908 – First Streetcar Service
1908 – Building Completed
1917-1918 – World War I
1935 – Regular PRR Electric Operations Commence
1937 – First Road Passenger Diesels
1941 – 1945 – World War II Operations
1951 – USO Lounge Reopens for Korean Conflict
1953 – Wreck of the Federal Express
1954 – Last Regular Steam Passenger Train
1971 – Amtrak Beginnings
1972 – Last Steam Passenger Excursion INTO Union Station
1976 – Metro Arrives
1976 – Bicentennial Visitors Center
1981 – Amtrak purchases Washington Terminal Company
1981 – Union Station Salvation Begins
1986 – Historic Rail Car Operations
1988 – Grand Reopening

The McMillian Commission determined that further development of the L’Enfant Plan necessitated removing existing railroad facilities from the National Mall. A Brief History of Union Station

Congress approved the union terminal site on the north side of Massachusetts Avenue, with D.H. Burnham & Co. as the building’s architects. Burnham and chief designer Peirce Anderson employed the elegant Beaux-Arts style and drew on Rome’s Baths of Diocletian and Triumph arches for the building’s inspiration. The glorious result helped set the tone for Washington’s monumental architecture for the next forty years.

February 28, 1903 President Theodore Roosevelt signs into law a measure “to provide for a Union Station in the District of Columbia.”

October, 1903-1908 Union Station construction begins. Washington Terminal RR (Washington Terminal company) created as the joint but independent Company to build and operate the station by its owners the Pennsylvania Railroad and the Baltimore & Ohio Railroad. The Washington Terminal company would provide switching services for B&O and PRR and tenants from the south (Chesapeake & Ohio, RF&P, Southern, Atlantic Coast Line, and Seaboard). Many at-grade crossings eliminated from the Virginia Ave mainline with new elevated trackage.

The main building was completed in October 1908 and opened at a cost of more than $16 million, including facilities, Brentwood car shops. The Washington Terminal company would provide switching services for B&O and PRR and tenants from the south (Chesapeake & Ohio, RF&P, Southern, Atlantic Coast Line, and Seaboard).

The station became a center of American efforts during World War I, moving deploying soldiers to ships bound for Europe and civilians to the capital to manage tremendous logistical demands.

The heart of Washington, as many as 200,000 passengers passed through the station in a single day. The Presidential Suite was converted in December 1941 to a USO Lounge, which served 6.5 million military service members before closing on May 31, 1946.

In 1951 the Presidential Suite was reopened as a U.S.O. lounge and dedicated by President Harry Truman as a permanent “home away from home” for traveling U.S. Armed Services members.

On the morning of January 15, 1953 the Pennsylvania Railroad’s Federal, the overnight train from Boston, crashed into the station 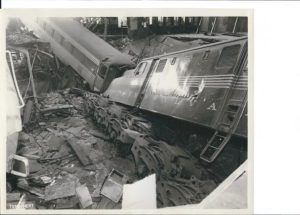 May 1, 1971 – Amtrak took over most of the Operations of the national passenger rail system and eventually established corporate headquarters at Union Station.

March 27, 1976 was the date that WMATA’s Red Line opened at Union Station.

For America’s Bicentennial Celebration the station was turned into a Visitors Center run by the National Park Service. It opened on July 4, 1976. The center being well off of the National Mall, was not heavily visited and closed just over two years later.

In June, 1981 the Washington Terminal Company was purchased by Amtrak. It took until December 1985 though to assimilate all unions into its Washington Division.

In May 1986 the DOVER HARBOR, a 1923 Pullman owned by the National Railway Historical Society, Washington, D.C. Chapter, Inc., achieved Amtrak certification and begin operating on Amtrak trains with it’s home Amtrak terminal in Washington, D.C. The car has been in continuous operation since 1986 on Amtrak and is available for mobile and stationary charters.

The station reopened in its present form on September 29, 1988 after a $160 million dollar renovation.

Today, Union Station is an intermodal transporation center. Taxis, bus companies, Washington, D.C.'s Metro System (on Red-Line) Amtrak, MARC, and Virginiai Railway Express all serve the station.  Contact informaiton for rail service is below: The station is managed by a not-for-profit called the Union Station Redevelopment Corporation. Their web site is www.usrcdc.com. 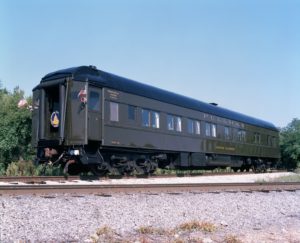 You can still ride out of Union Station on a vintage railroad car that used to regularly serve our nation's capital city. The National Railway Historical Society, Washington, D.C. Chapter, Inc. offers periodic rail excursions from Union Station aboard our beautifully restored 1923 Pullman passenger train sleeping car Dover Harbor. Or, even better, charter the Dover Harbor and plan a trip across this beautiful nation, by train!  For more infomation on going to over 500 destinations in the U.S. and Canada, visit www.doverharbor.com 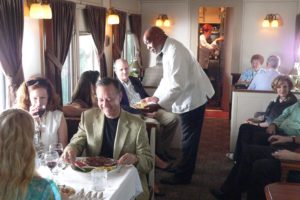